How to get your child started in pageants? 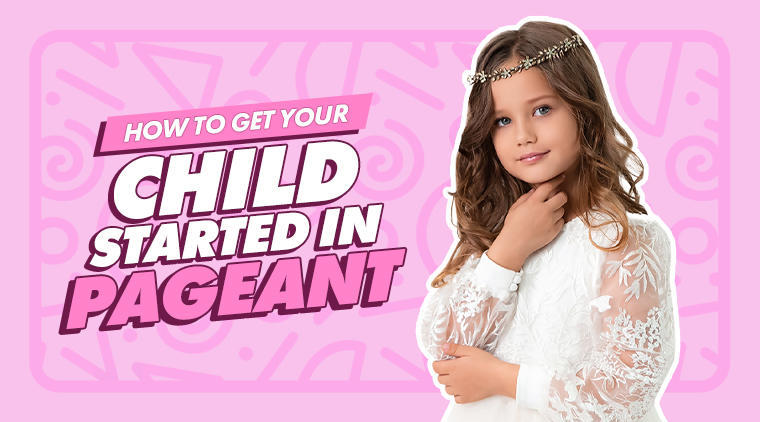 Start off by figuring out which baby, toddler, or child beauty pageant your little star could participate in. Since even the smaller scale local pageants can get quite competitive, you must understand it won’t necessarily be a piece of cake and will require a lot of preparation.

While the easiest time to start is when your child is a baby, since that requires significantly less getting ready for the stage things, don’t worry - with proper planning and investments, the chances are you’ll succeed.

Be realistic with the expectations for the first time around. Of course, you’ll have the chance to win but in these types of events, the experience of other children is of high significance - especially those, who have participated in national pageants before. The good news is that if you both are still ready to continue after the first pageant, the experience will be on your side too.

Immediately pressuring your child into realizing there will be serious competition is a mistake. Instead, embrace the fun parts of participating in a pageant, and hype up the new experience. Initially, this whole ordeal should be no different than other children’s activities, based on having a good time while preparing with family and participating with other peers.

Some repetition for the performance is, of course, needed but don’t push your child to do a step by step, stiff performance. Unexpected high jinks on the stage are completely fine - after all, it is a toddler pageant. The time to act serious and adult-like will arrive sooner than you think.

Having fun will ultimately help your child while participating in the pageant. Judges of the toddler beauty pageants are known to give higher scores to the kids that are visibly enjoying their participation in the event.

Read Also: How to Get Baby Into Modeling?

Pageant participant looks are a big part of the show and even tend to get individual awards. With that said, do your family budget a favor and don’t buy your child expensive clothes only for the sake of this one pageant.

Since the first time counts as testing the waters, there’s no guarantee about the next time, but the glitzy dresses for pageants can put you back even for a whole grand. Plus, children grow up really fast and the costume can end up too small come the next pageant too.

Consider renting instead, since options for children’s dresses and costumes are huge out there. But if you really want to buy, look up used dresses online - there’s certainly more than one previously eager parent, who decided to buy a new one without considering the aforementioned cons of it.

Shoes in children’s pageants are typically plain white and matted, not shiny. Socks also normally are white with a few layers of lace.

If you are crafty, you can make or update the pageant costume yourself! For example, buy a simple dress and add the glitzy features to it. Or update the socks a bit, by adding extra shiny details. Having a unique and well-thought costume can end up being the decisive moment in the final result of your child in the pageant.

The child’s visual preparation for the event doesn’t stop with the choice of clothes. What to do with your child’s hair? It’s all about making a statement by going with big volume. If your child’s hair is long enough, consider backcombing the curls to create the classic teased curls. If the curls start getting into the face, reconsider and possibly go with another iconic pageant hairstyle, by gathering the curls to the side - the side updo.

No worries if the child’s hair isn’t long enough for these two styles. Shorter strands can be easier modified to whatever pageant dress style you are going with. Or simply go with relaxed hair - you are testing everything, so the simplest hairstyle might end up being the best option.

While the options are numerous, and ultimately depend on what looks the best on your child, one thing to always remember is that the hair shouldn’t take the attention away from the face.

It’s almost showtime! If you follow the previous steps, your kid should be more or less ready for his or her first children’s beauty pageant.

By no means, though, don’t have your child wearing the show’s costume until shortly before stepping on the pageant's stage. The waiting time backstage usually is quite a while, so having your kid just sit down and wait, while also keeping a positive outlook on everything, probably won’t end up being a viable option. But giving the kid a bit of freedom has its downside too - even if your kid is normally very well-behaved and looked after, during the long period spent backstage children can still tend to suddenly express highly immature behavior.

Of course, the hair must be done before you arrive on the pageant’s premises. These means do not wear anything you have to pull over the head to change into the costume. Once it's on, give one last look if everything’s preppy and no strings are hanging. Tell your kid a joke or do something else you know will surely end up with a small laugh or a big smile. Showtime!

But wait, the role of a parent in the child’s first pageant doesn’t stop just yet! Depending on the age of your child, you might have to step on the stage together. If the kid is older than 4-5 years, it will cost you points but you are only starting at the pageants plus it's still ultimately permitted.

While you both are busy, consider having someone else from your family in the audience - in a perfect scenario, behind the judges of the pageant. Have the relative do something subtle, so your kid is interested and happy to look that way.

The beauty of children’s pageants is that it’s all about participation. Even if there’s only one winner, usually everyone gets a small award. If your child expresses disappointment over not taking the win, make a big deal out of the given memorabilia. It will give the kid more confidence if there will be the next time, and encourage them to not quit if something doesn’t happen on the first try.

It’s about having fun, and seeing what works and what doesn’t. If you decide to continue with the children’s beauty pageants, the progress you made with this first try will be undeniably visible while preparing for the second show.