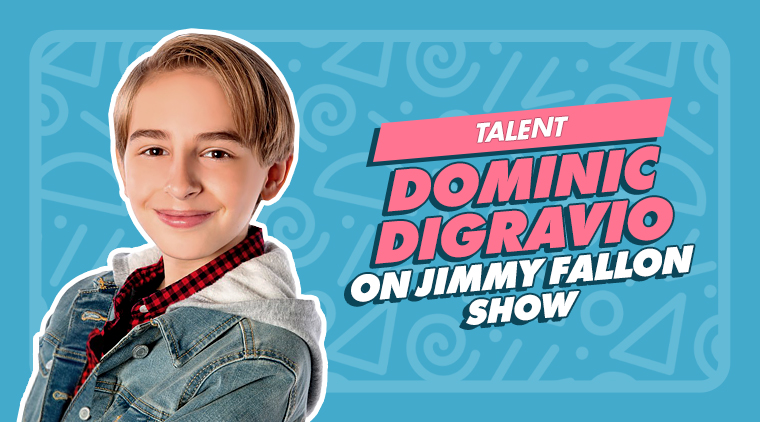 Little Dominic is a scientist and entertainer with a dream to land a role in a Disney movie. Thanks to his passion and dedication to performing, he has already become a Featured Talent on KidsCasting, so we have no doubt his dream is within arm’s reach! We are happy to share with you a heartfelt interview with Dominic’s mom Diane who shares wonderful advice for parents of talented kids with big dreams!

KidsCasting: Dominic is only 8 years old but already has built such an impressive portfolio. How did he get involved in acting and modeling?

Diane: Dominic just started acting and modeling this past summer. He has been a long time fan of the Disney Channel, and his dream is to someday audition and land a role for any of their upcoming movies or shows. Dominic is aware that it is important to gain as much experience as possible within the industry so therefore he has been applying for many modeling and acting roles. He loves any opportunity and has such fun auditioning!

D: We have only been a member of KidsCasting.com for 6 months.

D: Allowing Dominic the opportunity to apply for a variety of roles is helping him gain experience and confidence needed within the talent industry. He has had modeling opportunities, photo shoots, and has completed many video submissions. Whether he gets the role or not, he has fun with every entry!

KC: Dominic was recently invited to be a guest on The Tonight Show Starring Jimmy Fallon. Can you tell us about this amazing experience?

D: Dominic loves science! He has been an active participant of Camp Invention for three years now. Each year, Camp Invention teams up with General Electric in search for young scientists to make an appearance on the Fallonvention Segment of the Tonight Show. Dominic loves to create and to invent, so for him, the task of coming up with an invention to submit to the show was right up his alley! Last year’s invention made it pretty far within the process, but this past year, his invention of the “Shortie-No-More 360’s” was selected for the Tonight Show. Dominic was flown to NYC and was able to showcase his invention on National Television. He was then presented with a $5000 scholarship. This was super exciting for us all!

KC: To be on the national television is a huge deal to anyone. Was Dominic at all nervous to be on the show, and, if so, how did you deal with the stress?

D: This was Dominic’s second appearance on a TV set and in front of a live audience. He was a bit nervous at first but then his fears went away as he pretended that all the cameras which were in front of him were just his Mom and Dad taking videos of him. Dominic owes much of his self-confidence to KidsCasting.com as each of the video submissions we have recorded and turned in to casting directors has helped ease his nerves.

KC: What is Dominic’s main source of inspiration when it comes to performing?

D: Dominic aims to please! Whether it is in front of a camera, on stage, or within his classroom… he loves to meet new people and make people laugh! He is such a happy boy who is clearly inspired by sharing this happiness with others. He has an innate ability to light up a room with his charm, wit, and zest for life. His greatest quality is that he has the ability to see good in everyone and everything! His laughter is infectious, and he can light up a room with his body language and his sense of humor.

KC: And what is his favorite part about being in front of the camera or in front of an audience?

D: Dominic loves the opportunity to show the world that although he is small, he has a big personality! The attention he receives while in front of a camera is proof to him that he is his own individual.

KC: How does Dominic work on improving his acting skills?

D: Dominic spends a great deal of time watching the Disney Channel and YouTube videos of “behind the scenes.” He likes to sing and act out scenes from a variety of movies and musicals. His all-time favorite Disney Movie is “Zombies,” and nightly since its release in February 2018, Dominic reenacts and sings along to parts of this movie. Everyone within our home has songs from the movie completely well versed! We also read all the tips put out by KidsCasting.com and make sure those tips are fully understood by Dominic. We are currently looking into professional acting classes in NYC.

KC: As a mom of such a talented child, what do you think are some early signs that a child should give acting or modeling a try?

D: This is a great question, and the best answer is that there has to be the willingness on behalf of your child to perform. This was a journey that Dominic asked us to help him with. It was his desire to pursue an acting career, and here we are! We have been totally supportive of this journey and are doing everything within our power to help our son reach the goals he has set for himself. It’s a very competitive industry, and there is some disappointment as there is great talent out there for only a few roles to fill. We constantly celebrate all the small successes and see great value with every audition!

KC: Do you have any advice for KidsCasting.com members who aspire to become performers?

D: Take your time and don’t get too discouraged. It’s a competitive industry, so make sure to acknowledge all the milestones along the way. Keep auditioning for all that you are qualified for and build your portfolio.

KC: What advice would you give to moms and dads of young talents?

D: Support and encouragement are critical. Flexibility is also critical as auditions/roles come up so quickly and you have to be ready to travel. Not all jobs are paid jobs but building your child’s portfolio is monumental. Research the company you are auditioning for. KidsCasting.com does a great job sharing the profile of casting directors. We found that this was very helpful in determining which jobs were suiting for our child.

KC: What’s the best parenting advice you have ever received?

D: “Let your child be who they want to be!” “They are not you and will never be you.” These are the words from my primary care physician who has known me my entire life. My older son was enrolled in a private Catholic School for his first year of High School, and we struggled to keep him happy there. This school offers a rigid College Prep Program where most students within the Institution head to leading Colleges and Universities within the United States upon graduation. My oldest son held from us that he had no desire to take this route. He is a “hands-on” individual and has a true love for the trades. He wished to enter a technical school where he could learn the electrical field and upon graduation immediately enter the working world. This was difficult at first for me to conceive because College and at least a four-year degree was just something that was “supposed” to come next within his journey. I struggled with his decision but later realized that my child had his own passions and his own dreams. We have used this example to help ourselves stay grounded with Dominic’s decision to enter into the Talent Industry. This is his dream, and we will do everything as his parents to support that dream!

KC: What’s next for Dominic?

D: Dominic will continue to audition for upcoming roles. He recently signed with a Talent Agent who will be our set of eyes within the south-east portion of the United States, and we are currently looking for an agent who will be a good match for us within the New York City area. Like most children who enter into the Talent Industry, many wish to land a Disney role. Our little guy will continue to reach for those stars, and we will be there every step of the way. We are actually heading to Orlando at the end of the month for a Halloween Fashion Show and Photo Shoot for a magazine. We will be visiting Disneyworld while we are there.

KC: All that sounds very exciting! And the final question for you and Dominic, can you share a fun science fact with us?☺

D: Here is a science question that Dominic likes to ask folks, “Kool-Aid is red when the refrigerator door is open, what color is Kool-Aid when the refrigerator door is closed?” The most guessed answer to the question is that the Kool-Aid is still red… however, the answer is black. Dominic will explain that for an object to be seen, you must have reflected light. Dominic also loves to tell the story about “The Icicle of Death.” These icicles develop in the Arctic and Antarctic as a result of salt being forced out of sea ice, mixing with its surroundings. This surrounding water becomes more saline, lowering its freezing temperature and increasing its density. This prevents the water from freezing to the ice and causes it to sink. The sinking salt water freezes everything in its path while making its way to the ocean floor! “Watch it for yourself… and you will be amazed,” says Dominic!