What not to do at an audition? 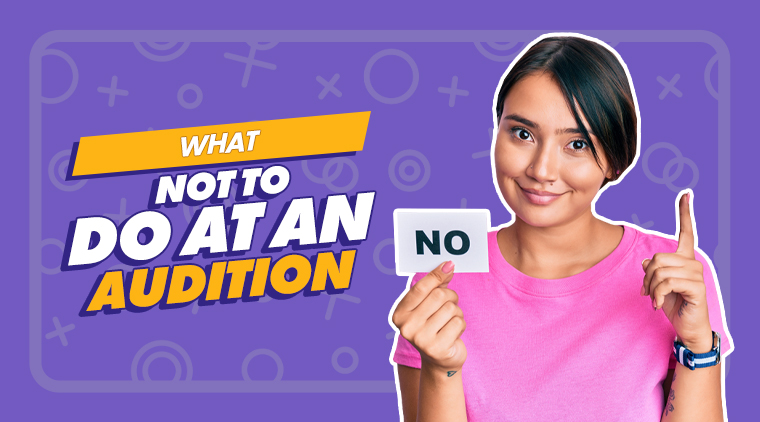 We always discuss tips and tricks for helping you kid land a callback, from sharing our favorite acting monologues to outfits that work best for casting.

Today, we’ve decided to share the opposite: what NOT to do when going to meet the casting team for both acting and modeling gigs. So, here’s what your kid and you shouldn’t do during an audition:

Never pressure your child to audition

The number one rule of success in acting and modeling is that a child should be passionate about it. Sure, the audition process can seem like a grueling one: there’s lots of waiting and uncertainty, and it’s easy to want to give up when the callbacks are just not coming as often as you’d like. But to find success in this industry, one must be persistent and not give up on their dream. Remember, acting and modeling should be fun for your kid. If your child fell out of love with it, then don’t make them go to auditions. Plus, the casting professional will most definitely pick up on the fact that you’re more eager to get the gig than your child.

Don’t suffer through the audition

This is for parents of babies and toddlers on the day of the audition: If your child skipped nap time and is too tired, or they had too much sugar and are feeling too wired, then it’s a good idea to pass on attending altogether. Avoid this mistake if you don’t want a casting professional to remember your child by their bad behavior (whiny or wired kids rarely do well during the auditions).

When you prep your child for an audition, remind them of proper etiquette and behavior during an audition. Your child shouldn’t avoid eye contact with the casting director, especially when introducing themselves for the first time.

Avoid asking too many questions

When entering a casting room, your child should do the following: clearly state their name and age, perform their scene/monologue, or in case of modeling casting hand over their modeling portfolio. And at the end of the audition say thank you and exit the room. We would advise not to ask how the audition went, or when to expect a callback. Trust us, taking too much of the casting director’s time will only annoy them.

Don’t scold your child in front of the casting team

If you don’t want your child to get a callback, then go ahead and make it awkward for the casting team by criticizing your child right in front of them. Even if your child has made a mistake, NEVER scold them in the presence of the casting director. Chances are, he’ll never want to work with you or your kid.

Don’t make excuses for your child

If the casting or an audition didn’t go as planned and your child has forgotten their monologue or got too nervous, don’t overcompensate with excuses. The truth is that each casting professional only has a couple of minutes to spend on each participant, and they simply don't have the time to listen to the often unnecessary excuses. Simply take a bad audition and learn from it.

Don’t just focus on your child

If you are a parent to a child actor or model, remember that you are being judged as well. Casting directors want to know right off the bat that if they hire your child that you will be easy to work with as well! We encourage you to take these tips into consideration when preparing your kid for their next audition or casting! So, take nap time and snacks into consideration, don’t push your child to audition if they don’t want to, make sure to be more of a support system for your child, and let them show off their talent while rooting for them behind the scenes (so to speak). Good luck!