How to get babies into acting? 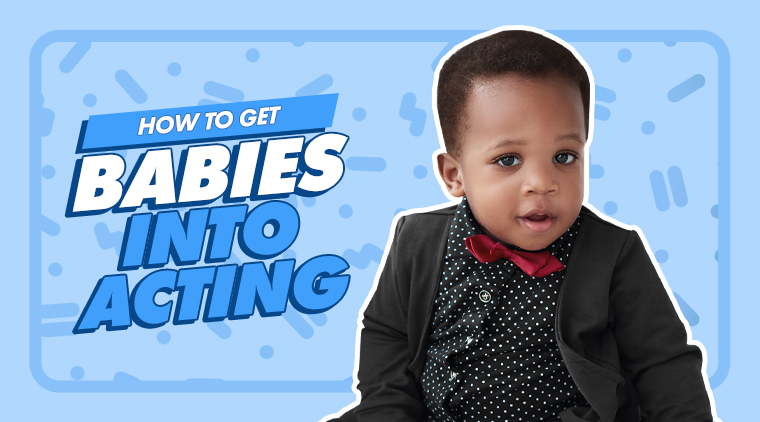 Some things are fairly self-explanatory when it comes to getting into acting. Adults make decisions on participating in castings themselves. Children express such desires and adults, namely, their parents, try to guide them in that the best they can. But then there are also the baby slash actors! Read on to learn how this process works with them. Babies don’t express the wish to start acting in any way, of course. Since they are too young to yet even grasp the concept of acting, it’s really up to their parents to want to go through all of it. So, the parents think their kid is cute. He or she looks adorable in the photos and videos taken on their family member’s phone. The child's smile makes everything better. And the baby has possibly already fetched quite a few social media Likes. Maybe the baby has a future in the limelight?

When can a baby become an actor?

The laws in the United States of America differ in the matter of when babies can get into acting. New Mexico, West Virginia, and Wyoming have no formal age restrictions for baby labor at all. The state of California law allows babies to start working from when they are 15 days old, as long as the baby has a work permit and a note from a licensed doctor which confirms the child’s ability to physically handle such a venture.

Read Also: How to Get my Baby into Modeling

Most states also allow prematurely born babies to be hired, and 18 states don’t have any specific laws regarding their labor. These babies tend to be in demand due to being great for scenes of giving birth. Meanwhile, California state law deems it illegal to hire premature babies.

The rest of the process isn’t much different from the older children’s first steps into the world of acting. First of all, you’ll need good photos which show off the baby's personality to the fullest. Some of them look cute, some look funny, and so on - whatever the case may be with yours, these photos you’ll submit to casting directors should show exactly who and how your toddler is.

While a random occurrence might look great in that one photo, the chances are it won’t be possible to recreate it regularly - don’t send that. Also, avoid clothes and other features that alter the talented newborn’s appearance. Focus on your baby's behavior and personality on an everyday basis level - his or her eyes, smile, and other facial features.

Speaking of behavior, the parents should objectively assess their baby's ability to sit through a photo or video shoot. If the baby tends to get emotional or easily distracted, without the possibility of effectively calming down in a quick way, the adorable looks unlikely will be enough.

Also, if the baby tends to sleep a lot, he or she won’t get disturbed on the set, but there’s a high chance of losing out on the role due to it. On the other hand, if the baby isn’t a big sleeper, he or she might become in demand quickly.

Ultimately, most of the decisions for very young aspiring actors are made by their parents. Do your research on the castings, think long and hard if your baby will enjoy such an ordeal, and if everything feels just right, go on and submit that application.

How much do baby actors make?

To answer this question, you once again have to look at the laws of each of the 51 states in the United States separately. They affect everything, from the daily hours allowed to put the baby into labor, to the salary their parents receive for the effort.

For example, California laws don’t allow babies that are younger than six months to work for longer than 20 minutes per day. For this whole time period, the law demands that the baby is accompanied by a guardian. Such time restrictions are a blessing in disguise for parents with twins or triplets, since the siblings can play a single role, while continuously abiding by the law of the state.

Also Read: How much do child actors get paid?

This brings us back to the question about baby actor wages. A day's rate for a baby actor is basically the same as for the average extra or background actor at a shoot. Since babies don’t speak, their work often goes uncredited - the same as with the extras. That isn’t set in stone, though. If the parents negotiate well, there have been plenty of cases when the baby gets paid in the status of a principal performer.

Just something more to keep in mind regarding the very same baby labor laws. For example, in California, every child under the age of 18 in show business is automatically given a blocked trust account. It guarantees that 15% of the salary earned as a minor within 15 days of employment is sent to the account and becomes accessible only once they become of legal age.

How do you train a baby actor?

The baby can’t go through professional acting courses just yet but the competition tends to be rather fierce, so there are some things parents can do to prepare their cutie-pie for the very first steps into the world of showbiz.

This brings us back to the topic of babies' behavior on the set. While minor and adult actors are old enough to have quirky personality traits that, in most cases, can be reasoned with, babies are unpredictable. Before any castings and shoots, you should try out ways to find out the best one for keeping or getting your baby to be calm and content. This includes trying out potential products that will be used in the shoot beforehand.

Also Read: How to Practice Acting at Home?

Speaking of the mood, it might be for the best to avoid giving the baby its beloved items on the days of auditions and shoots since children are known to cling to toys and might throw a tantrum once it’s time to give them up before the shoot.

Another thing to try out before heading to castings is making sure your baby won’t get emotional upon being taken away from you. You won’t participate in the shoot and are unlikely to be clearly visible during it, but if the newborn bursts into tears without you, it will make it impossible to continue on the set. Try out giving the baby to other relatives and friends, while disappearing for a little bit, so the kid gets somewhat used to such a thing.

Also, figure out simple ways to get your baby to change facial expressions. Happy face, sad face, grumpy face - the more he or she can do without much effort, the better! The easiest way to accomplish it is through doing such faces yourself - the toddler will likely go on and mimic it.

Finally, once the day comes, you must make sure your baby is well-rested and well fed, so he or she arrives on the set in a good mood. This could end up becoming an amazing bonding pastime for both the baby and the parents!