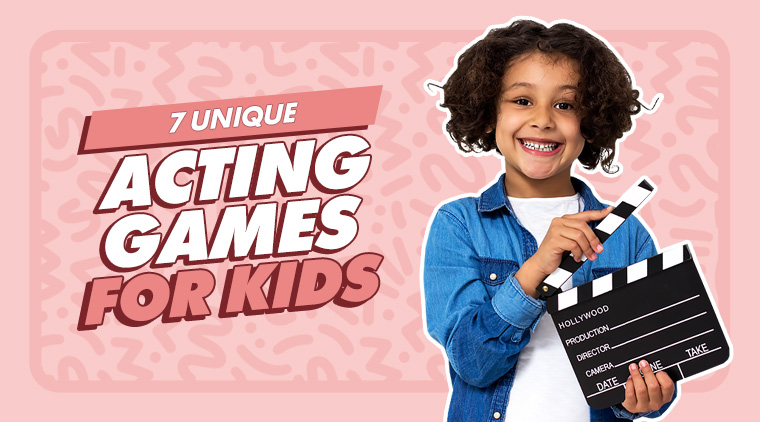 Games are the most powerful way to learn. These acting games for kids will help naturally and effortlessly develop your kid's acting range while having a lot of fun in the process.

Why are acting games important for children?

Every kid has dreamed of being a famous actor or actress. And parents encouraging their passion is amazing. But more often than not, the passion can disappear when faced with all the incredibly hard work an actor has to do - memorizing lines, learning new skills, and rehearsing over and over again. It might be fun at the start, but it quickly becomes a chore. Kids can get discouraged.  Acting games for kids are an incredible way to keep the passion going. There are tons of acting exercises you can do together at home, but acting games are the best one. They remind kids that acting is fun and teach them lots of useful skills in a super entertaining way. On top of that, they help with sparking imagination, inspiring self-confidence, polishing character portrayal skills, and generally better understanding human emotions and how to portray them.  What's more, these games can really help strengthen the bond you have with your kid. Having a shared activity that's bound to result in lots of laughs is not only a fun way to pass the time. Playing these together really shows your kid that you're taking an active part in making their dream a reality.

The following games are meant for young children, preteens and teens alike. Some can even make fun party games for adults. You can play them together with your child, but more people can get involved - there are no limits!

How to play: Pick any casual activity (walking down the street, eating dinner, getting ready for bed) and do it in as many different ways as you can imagine until you both run out of ideas! Example: Take “entering the room” as your theme. Both you and your kid take turns and enter the room in different ways: angry, lost, forgot something, escaping someone, hiding, sneaky, and whatever else you can think of. And try to guess what each other's showing!  This example was inspired by our very own KidsCasting talent Alex! Check it out - he came up with 19 different ways:

Benefits: A Million ways to... is a fun acting game for kids that's great for bringing out creativity and understanding that EVERY situation can be played in many different ways. Since you can enter the room with a specific emotion, or as a character, or in an interesting way, it really allows your kid to explore a very wide range of acting aspects.

How to play: Have your kid pretend to be a character they love & know, e.g. an actor, a family member, a singer, a cartoon character. Then you interview them and they have to respond as that character. If you want, you can give them time to prepare.  Example: You've just watched Home Alone. Invite your kid to pretend they're Kevin and ask them some questions, such as “So, how did you feel when the Wet Bandits were at your door? Were you scared or confident? Why?” and “Which of your family members would you want by your side the next time something similar happens?”. You can also throw in some general questions such as “What is the best part of being famous?”. Just remind them to answer from the star's perspective and not their own.  Benefits: If you do this often, your kid will learn to pick up on character cues and understand that characters have background, which helps define performance. In turn, this will help them build richer personas when they're auditioning for a role, or are already acting in a film. These type of acting games for kids really help better understand characters and what actors do.  And it's super fun! Kids are inspired to act by their heroes, so give them the opportunity to be that hero and watch them embrace the opportunity with open arms!

3. Mirror, mirror, on the wall

How to play: One of you pretends to be a reflection of the other and mimics everything the other person does. Can do it full-body, or just the face. Plus, you can introduce voice, as well.  Example: Sit down with your child and ask them to mirror your facial expressions. Start with some easy ones, such as Happy, Sad, Angry, Bored, and then add some more difficult ones, such as thoughtful, disappointed, hungry, disgusted, excited, in pain, curious, and any others that spring to mind. To make it easier for your kid, tell them to say what the expression means out loud. But remember, the goal is to be a mirror. Teach your kid not only to mirror the emotion itself but to focus on and mimic the facial expressions. Benefits: This is another acting game for children that lets them explore a wide range of motion and emotion. It helps them focus on very specific things and pick up on cues they might otherwise miss. Plus you can play this anytime - while getting ready for bed, while hanging out at a family event, or right before an audition!

How to play: Prepare a list of characters (celebrities, family members, cartoon characters, professions) that your kid knows and that have some distinct behaviors. You take turns taking a name out of the hat and acting as the character. And take turns guessing what the other is showing.  Example: Let's take SpongeBob SquarePants as an example. The goal is not to find the easiest way to guess the character (e.g. showing a square and then pointing at pants), but rather to play as if you are the character (e.g. wide-eyed, smiling, flipping burgers, being friends with a starfish). Since you'll have prepared the list, you should be able to guess what's being shown.  Alternatively, you can skip preparing the list and just pick a theme. It can be cartoon characters in general, or from a specific show, or it can be celebrities, family members, movie characters, and more. Benefits: Character Charades let your kid understand what defines a character, be it a cartoon sponge or a family member. And the more you play this game, the better they'll be able to imitate these defining characteristics, which will help a lot when there's a real acting role waiting for your kid.

How to play: This game is best played when there are people around. The original idea goes like this: your kid has to pretend to have lost a toy somewhere in the room and has to get someone to help them find it without saying “Please help me find it”. But you can make your own variation - the idea is that your kid has to get someone to do something by acting and without asking the person to do it.  Example: Some ideas that your kid can pretend to need help with:

You can turn this game into a competition - you both set each other a task that you have to pretend to need help with and then the winner is the one who gets someone to help by using as few words as possible. Just remember - make sure you tell your “victim” that this is a game and what the rules are. Otherwise, you might step on some toes. Benefits: This game can teach your kid a very valuable lesson about the power an actor has. But on a more practical level, it's fantastic to explore what it takes to get people engaged and achieving that using different methods. Getting their audience to feel or do something is the single most important goal of an actor, and this game helps understand how to do that.  It's also fun and prank-ish, so it really appeals to the little mischievous side every kid has!

How to play: This game is very similar to the A Million Ways to… game, but focuses on the voice & face. Take a phrase, any phrase, and try to say it in as many different ways as possible. Change up the emotions and the intonation every round and, if you have an audience, have them guess what the emotion was!  Example: “She took his toy” can be delivered in an angry, happy, shocked, curious, and many other ways. You can also explore how putting emphasis on different words in the sentence changes the meaning & tone:

Feel free to set your own winning conditions - it can be the most different ways, the best quality ones, or the most creative ones - just remember to have lots of fun!  Benefits: Understanding what words to emphasize and different ways to deliver them can help your kid develop a much more nuanced approach to line delivery that will help them stand out in an audition. It also unleashes creativity and builds a strong foundation for improv - two very important skills for actors.

How to play: Prepare a list of tongue twisters and challenge each other to say them without messing up. If your kid can do it well, then you can make it a challenge - which one of you can say it faster & more times without the words blending together! Examples: Here are some popular tongue twisters:

Benefits: An actor's voice is one of their most valuable instruments - reciting fun tongue twisters can help develop a clear speaking-voice and improved voice control. It's a great speaking exercise before an audition to get that tongue loose and vocal cords warmed up!  The best part - you can do it anywhere, anytime.

Remember: Acting games for kids should have prizes

Don't forget to have a reward that motivates your kid to give it their best. It doesn't have to be candy or buying things. Here's an idea: create a certificate or a different token trophy for “The Tongue Twister Champion” or “The World's BEST Mirror”, and when your kid excels at a game - award them with it. You can even make a whole Oscars-like ceremony if you like and make them feel like the superstar they are. But you can also sometimes outshine your kid and perform better, taking the trophy for yourself. That can motivate your kid to do better and win it back the next time!  Playing these games will help constantly remind your kid how wonderful and how much fun acting is. And you'll find yourself having a great time as well! Let us know which of these acting games for kids ends up being your household's favorite below in the comments!