3 Reasons Your Kid Didn't Get the Callback 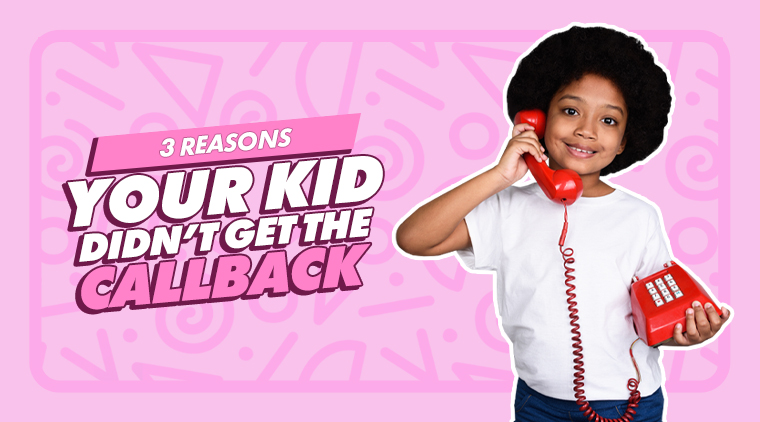 You both leave the audition with your hopes up and excitedly wait for that phone call, but the phone never rings. It’s super frustrating, and the worst thing is, it’s hard to break the sad news to your kid when you don’t know why they weren’t picked. We want to tell you that there’s a lot more than meets the eye when it comes to the casting process. Here’s a little behind-the-scenes look at what can happen after your kid leaves the audition room.

Have you ever watched a movie or TV show and thought to yourself that something’s a bit off in the cast? Siblings that don’t look related, a couple that doesn’t have good chemistry. Mixing and matching are tricky things. When a casting director gets to work, they are considering many other factors besides your child’s talent. Anything from accents to physical features, to energy, can make a big difference. Your kid may have done a great job, but they won’t get picked if they don’t fit with other actors who have already been cast.

Nothing’s carved in stone when it comes to the creative process. The qualities and role description can change on a daily basis! Often times actors get new and revised lines in the morning of production. So, as you can imagine, the creative process does not stop after the audition. In the time between the audition and the callback, the casting team and producers can make alterations where your kid is no longer the best fit.

When the casting director says, “Thank you, good job,” it doesn’t necessarily mean that your kid will be invited to the second audition. Sometimes young actors lack the ability to follow directions. Other times, they have difficulty getting into the character. While your kid is doing a good job, their auditioning and acting skill level may not yet be up to what’s needed to work on the project. This doesn’t mean that with more classes and auditions it won’t develop. It just means that at this moment, that particular casting director doesn’t see it.

The truth is, there’s nothing you or your child can do about the outcome of an audition. Teach them to learn from every experience, and once an audition is over – let it go. The phone will ring in its own time! The more your child auditions, the more confident they’ll feel in front of the casting director, and the sooner they'll find the perfect project. Check out this week’s listings in your area.